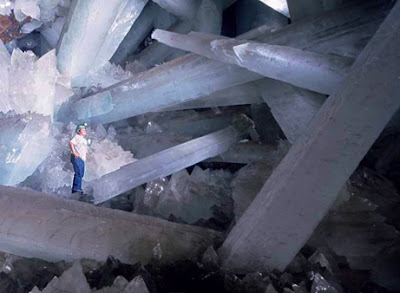 April 9, 2007—Geologist Juan Manuel García-Ruiz calls it "the Sistine Chapel of crystals," but Superman could call it home.

A sort of south-of-the-border Fortress of Solitude, Mexico's Cueva de los Cristales (Cave of Crystals) contains some of the world's largest known natural crystals—translucent beams of gypsum as long as 36 feet (11 meters).

How did the crystals reach such superheroic proportions?

In the new issue of the journal Geology, García-Ruiz reports that for millennia the crystals thrived in the cave's extremely rare and stable natural environment. Temperatures hovered consistently around a steamy 136 degrees Fahrenheit (58 degrees Celsius), and the cave was filled with mineral-rich water that drove the crystals' growth.

Modern-day mining operations exposed the natural wonder by pumping water out of the 30-by-90-foot (10-by-30-meter) cave, which was found in 2000 near the town of Delicias (Chihuahua state map). Now García-Ruiz is advising the mining company to preserve the caves.

"There is no other place on the planet," García-Ruiz said, "where the mineral world reveals itself in such beauty."
By almakai at January 31, 2008 1 comment: