Diagnosis and treatment of polonium poisoning.

Interest in the clinical toxicology of 210polonium (210Po) has been stimulated by the poisoning of Alexander Litvinenko in 2006. This article reviews the clinical features, diagnosis, and treatment of acute radiation syndrome (ARS) resulting from the ingestion of 210Po. Physical characteristics. 210Po is a high-energy a-emitter (radioactive half-life 138 days) that presents a radiation hazard only if taken into the body, for example, by ingestion, because of the low range of alpha particles in biological tissues. As a result, external contamination does not cause radiation sickness. Toxicokinetics. Ingested 210Po is concentrated initially in red blood cells and then the liver, kidneys, spleen, bone marrow, gastrointestinal (GI) tract, and gonads. 210Po is excreted in urine, bile, sweat, and (possibly) breath and is also deposited in hair. After ingestion, unabsorbed 210Po is present in the faeces. The elimination half-life in man is approximately 30–50 days. In the absence of medical treatment, the fatal oral amount is probably in the order of 10–30 mg. Clinical presentation. If the absorbed dose is sufficiently large (e.g., >0.7 Gy), 210Po can cause ARS. This is characterized by a prodromal phase, in which nausea, vomiting, anorexia, lymphopenia, and sometimes diarrhea develop after exposure. Higher radiation doses cause a more rapid onset of symptoms and a more rapid reduction in lymphocyte count. The prodromal phase may be followed by a latent phase during which there is some clinical improvement. Subsequently, the characteristic bone marrow (0.7–10 Gy), GI (8–10 Gy), or cardiovascular/central nervous system syndromes (>20 Gy) develop, with the timing and pattern of features dependent on the systemic dose. The triad of early emesis followed by hair loss and bone marrow failure is typical of ARS. Those patients who do not recover die within weeks to months, whereas in those who survive, full recovery can take many months. Investigation and diagnosis. Serial blood counts are important for assessing the rate of reduction in lymphocyte counts. 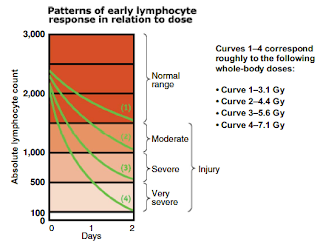 Chromosome analysis, especially the dicentric count, may establish radiation effects and provides an estimation of dose. The diagnosis of 210Po poisoning is established by the presence of 210Po in urine and faeces and the exclusion of other possible causes. In the absence of a history of exposure, diagnosis is very difficult as clinical features are similar to those of much more common conditions, such as GI infections and bone marrow failure caused, for example, by drugs, other toxins, or infections. Management. Good supportive care is essential and should be directed at controlling symptoms, preventing infections but treating those that do arise, and transfusion of blood and platelets as appropriate. Gastric aspiration or lavage may be useful if performed soon after ingestion. Chelation therapy is also likely to be beneficial, with research in animals suggesting reduced retention in the body and improvements in survival, although increased activity in some radiosensitive organs has also been reported with some chelating agents. Dimercaprol (British Anti-Lewisite) (with penicillamine as an alternative) is currently recommended for 210Po poisoning, but animal models also indicate efficacy for 2,3,-dimercapto-1-propanesulfonic acid, meso-dimercaptosuccinic acid, or N,N´ dihydroxyethylethelene-diamine-N,N´-bisdithiocarbamate.
Conclusions. Internal contamination with 210Po can cause ARS, which should be considered in patients presenting initially with unexplained emesis, followed later by bone marrow failure and hair loss.