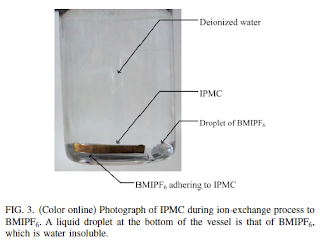 It is a surprise that among IPMCs with ionic liquids 1-ethyl-3-methyl-imidazolium tetrafluoroborate, 1-buthyl-3-methyl-imidazolium tetrafluoroborate _ BMIBF4_ , and 1-buthyl-3-methyl-imidazolium hexafluorophosphate _ BMIPF6_ , IPMC with water-insoluble BMIPF6  exhibited a larger bending curvature than that IPMC with water-miscible BMIBF4 . This might be due to effective incorporation of BMIPF6  into IPMC, since BMIPF6  has a higher affinity with IPMC than with water in the mixture of water and BMIPF6 . From measurements of complex impedance and step voltage response of the driving current of IPMCs with ionic liquid, they are expressed by an equivalent circuit of a parallel combination of a serial circuit of membrane resistance of Nafion® and electric double layer capacitance at metal electrodes, with membrane capacitance of Nafion® , in a frequency range higher than about 0.1 Hz. The difference in magnitude of bending curvature in three kinds of IPMCs with ionic liquids is mainly due to the difference in bending response speed coming from the difference in the membrane resistance.

In stock products can be shipped out within 3-5 business days upon receipt of customers' purchase order. Morpholinium ionic liquids