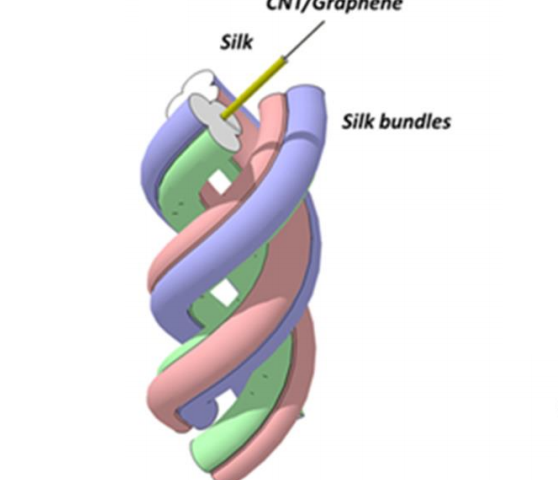 A team of researchers working in Italy has found that simply spraying a spider with a carbon nanotube solution can cause the spider to spin stronger webs. In their paper they have uploaded to the preprint server arXiv, the team describes their experiments with both graphene and nanotube solutions and what happened when they sprayed it on ordinary spiders.

As the researchers note, while silk production using silkworms has been quite successful, doing the same to harvest silk from spiders has not, (because of their territorial traits, the complex nature of the silk they make and their cannibalistic tendencies) which is frustrating as the silk they make to spin their webs has so many outstanding qualities. Intrigued by prior research efforts that investigated the possibility of enhancing spider silk by spraying the spiders or feeding them different materials (titanium, zinc, aluminum, lead, etc.) to improve the mechanical, electrical, magnetic or even fluorescent properties of the silk, the researchers wondered what would happen if they sprayed the arachnids, with a graphene or carbon nanotube solution.
To find out, they wandered out into the natural environs near their lab and collected a host of cellar spiders and carefully brought them back to their lab. They then proceeded to spray ten of them with a carbon nanotube solution and five with a graphene solution (the particles were 200 to 300 nanometers in width). Sadly, four of the spiders died shortly thereafter, and some produced poor quality webs, but a few of them produced webs that were actually stronger than their normal webs. Testing showed that some of the silk with nanotubes in it was 3.5 times as strong as giant riverine orb spider silk, which is considered the strongest natural spider silk. Also closer examination using Ramen spectroscopy revealed peaks in the silk where the nanotubes were present.
The researchers do not know how the carbon in either form wound up in the silk, but have excluded the possibility that it became drenched with it as it exited the spider's body, the uniformity of the silk was too fine—they think that the spiders pull materials in from their immediate environment and use it as an ingredient in their silk making. Their results suggest it should be possible to produce such silk in small quantities, though it is not clear to what use it would be put
http://phys.org/news/2015-05-spiders-carbon-nanotubes-superstrong-webs.html#jCp
By Unknown at May 06, 2015